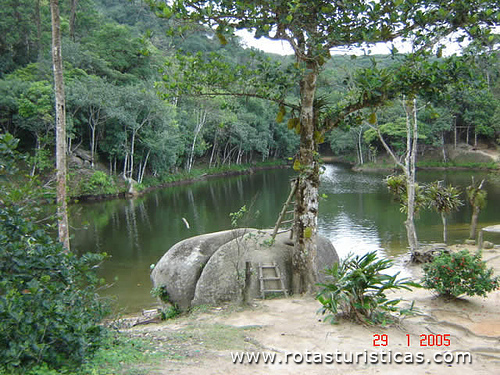 Suggest Place to Visit
117
Serra de Aratanha is a State Environmental Preservation Area, created by Decree No. 24,954 on June 5, 1998. It is located in the municipalities of Maranguape, Pacatuba, Guaiúba, being cut by two rivers, Pacatuba and Guaiúba, which they originate from several springs at the top of the Serra and will end up in the Pacoti-Riachão-Gavião system. It covers a total area of ​​6,448.29 ha.

The physiognomy of the vegetation presents trees with straight, thick stems, often covered with lichens, orchids, ferns and bromeliads. The fauna consists of a wide variety of rodents, birds, mammals, snakes and insects. The altitude of the mountain range is approximately 653.7 meters.

We don´t have yet any comments about:
Serra de Aratanha
Be the first to leave a comment as it is very important to inform other people